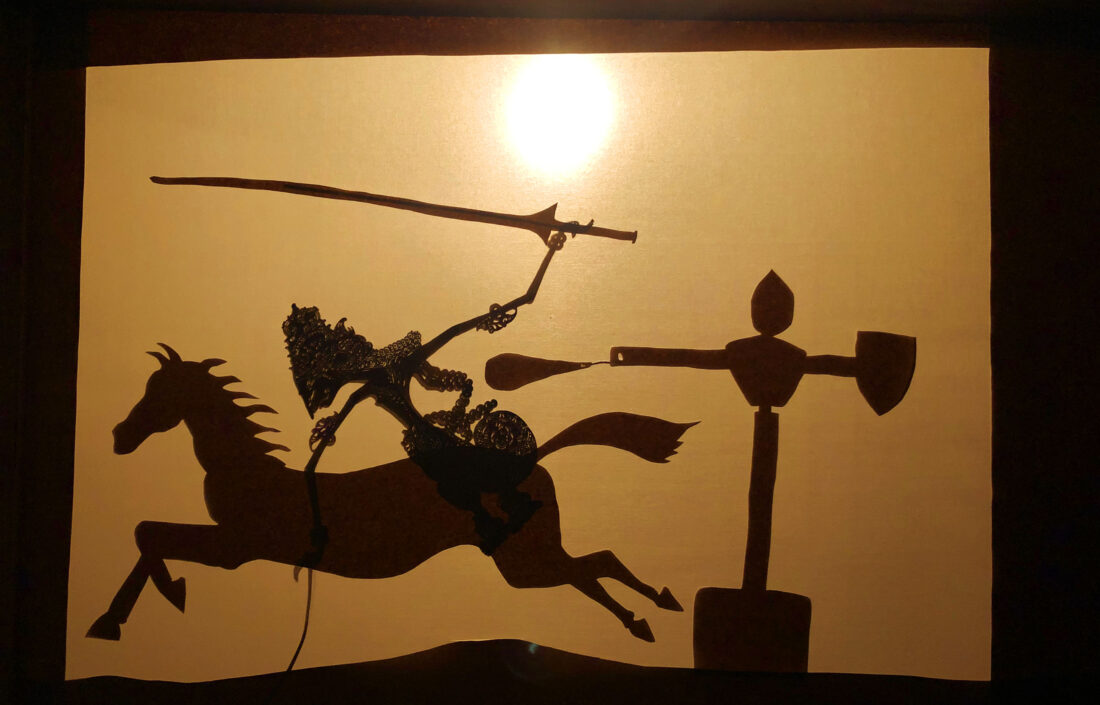 quintain kwin’ tin, (hist) n a post for tilting at, often with a turning cross-piece to strike the unskilful tilter. Used in training for jousts and tournaments.

Clonk – woomph – clatter.
Through the open window of the study, you could hear the noise from the castle grounds.

The Baron turned to his agent. “Never mind the clash, Jenkins, I am certain it will amount to no more than just another dent in his harness.” He paused for a moment. “And some bruises, I presume. Anyway, where were we?”

The agent looked up from the little table next to the Baron’s desk. “We were discussing the wages, Sir.”

“Ah yes, the wages. Do remind me how many farm-hands we have on the estate.”

“And all of them are most indispensable, as you keep assuring me.”

“I am afraid that seems to be the case, Sir. As you will remember, last winter we let go a dozen.” Jenkins seemed to observe a spot in the sky through the window. “But it turned out the remaining crew barely managed to haul in all the logs from the hills, and we had to make them work Sundays in order to be ready for planting season.  And I would be remiss were I not to observe that the Baroness was explicit about the men’s side of the church being so empty -”

“Jenkins”, the Baron turned around, “don’t remind me how skilled the Baroness is at giving orders. I am certain that particular instance was due to the many snowstorms last year. Work slows down during heavy weather.”

“Indeed it does, Sir. Although such weather has not been unusual in other years…”

“Pray, why do you always have to find a reason when I have not asked for one!” the Baron sighed. “So you are suggesting we cannot reduce their number any further.”

“To be honest I would not think it opportune, Sir.”

“I suppose that’s the way it must be, then. Still, we could cut their wages, could we not?”

Jenkins seemed to consider this for a moment. “The last cuts were not well received, as you may recall, Sir. There was that most unfortunate incident with the coach.”

“That is quite enough, Jenkins, you needn’t remind me of that one. To this day I feel shivers of pain when I recall how long it took you to get me out of that pigsty.”

“I am so very sorry, Sir. I am afraid I am not of such a robust condition as yourself, Sir.” The agent avoided looking at the Baron’s midsection, lest the sight force him do reconsider his choice of words.

“And we never did find the culprit.”

“Not to the present day, Sir.”

The Baron resisted the urge to go to the window. “No improvement in the jousting either, I hear.”

“Hmm. Still, the wages are the most sizeable figure I see on the cost side. Surely we can do something about it. Outsourcing, perhaps?”

“I beg your pardon, Sir?” It didn’t befit Jenkins to blink nervously, the Baron thought, observing the secretary’s reading glasses that had migrated to the tip of his nose.

“You know, just as I had decided to do with basketry. Our men cut the willow here, and off it goes over the border to be woven by the big workshops. I shall be inclined to do just the same with our grape harvest. We could do away with all the wine cellars, the casks, the bottling. It would be a most fortunate prospect, I think.”

“Ah, Sir, I looked into that when I carried out your plan to give our apples and cherries to the distillery yonder in France, and close our fruit stalls on the local market. The French winemakers were indeed adamant about never taking our grapes. They become quite agitated about our weather conditions, and what they call the local terroir. But I do suspect, Sir, that the real reason to turn us down was something else. I fear they discovered that our deal with the distillery might not have been excessively convenient from their perspective.”

He lifted his gaze cautiously towards the Baron. It looked like he would get one of his sermons this time. Just as well.

“Well, that is precisely the way it is supposed to be in business. I do not see why they are surprised, there is nothing outlandish if we take a hard stand in negotiations. Anyway, if they will not work our grapes over there, why do we not take on their workers instead, and bring them here? After all, they work for cheaper wages, do they not? We could even pay them a bit more than they make there, on condition that they take lodgings in our cottages. If we raised the rent, we would get money back this way.”

An awkward silence ensued, while both decided to ignore the sound.

“Pray, Sir, and what is to become of the current tenants?”

“Oh they would have to leave, of course. But since we are replacing their jobs with the Frenchmen, why should they want to be staying anyway? ” He took a deep breath and smiled. “Capital! Just capital! This looks like the way forward to me then. All we need to do now is pick a fellow who is persuasive enough, and send him over to recruit some Frenchmen for us. What was that chap called again? That young one who recently got elected into the village council with such a smashing result?”

“Merton, Sir?” The agent’s pencil came to an abrupt halt.

“Yes, just the one. He seems to be a lad with a bright future, does he not? People adore him, I hear.”

“Well, Sir, yes, as a matter of fact they do. I am just not sure whether he is the right one for an endeavour abroad, Sir. Besides, it appears he prefers to stay here for the time being. He proclaimed that he shall be putting his attentions to local politics.”

The Baron seemed little convinced. “And how does that keep him occupied?”

“The company he keeps are now sporting the same sort of shirts and boots, in the intent to be better recognised in the streets. And they sit together at the tavern each night. ”

“Ah, he is forming a movement. How extraordinary!  It only goes to show his cunning and intelligence. I most certainly like that.”

“Ehem, I am afraid I beg to differ, Sir. This movement, as you choose to call it, is not exactly of the most inspiring sort. If I may be so blunt to say, Sir, they are a bunch of ruffians that I should prefer not to cross in a dark alley.”

“A movement has to be open to any man, Jenkins, as long as they come with high spirits and ready engagement! But why do you say he would not be any use abroad? ”

“Well that is exactly the point, Sir. They go around saying it’s time to turn all the foreigners out. Rumour goes it was they who burned the cottage of the O’Brian widow and her crippled son, and later some of them went around saying she was a witch. ”

Suddenly the Baron turned red in the face. “Did he, now? That cottage belonged to me! What an impertinent sod! How can he be part of that riff-raff? And I had such high hopes for him. How very disconcerting! Why on earth do people vote for such fools?”

“And for God’s sake can someone finally get my son to learn how to fight the quintain! The harder you hit the shield, the harder the truncheon comes round and hits you on the back. It is really not that difficult to understand! ”