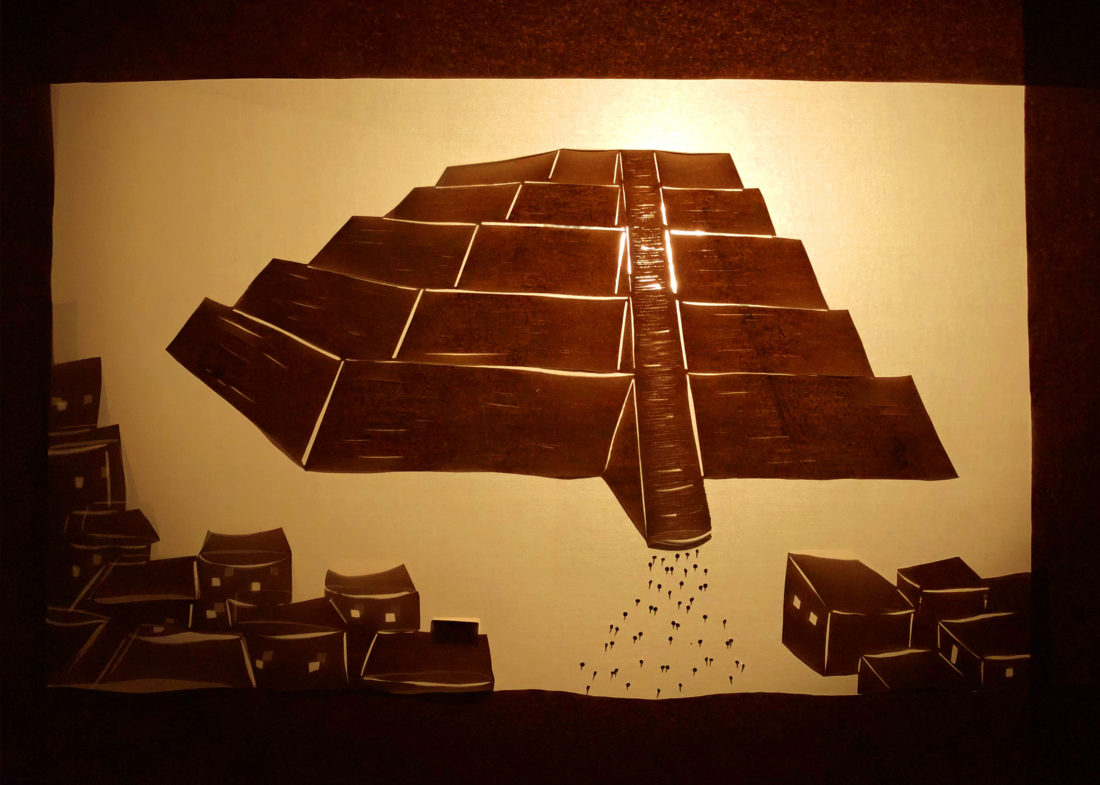 he pyramid stood glowing against the rising sun. It dwarfed the vast expanse of simple buildings around it, and since the main roads all pointed towards it, it looked as if a giant octopus had descended onto the city, and sucked all life towards its centre.

And in a way, that’s exactly what it did.

Each day, processions of pilgrims climbed up the pyramid’s steps, to pass the day in worship and enlightenment. Now people, as we all know, like to mingle with the likeminded. And the pyramid adapted in the most intelligent and obvious way to our segmented society: it was built in layers. 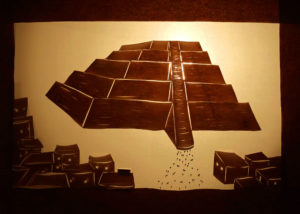 Like a series of belts around a well-nourished belly, the layers cut into the pyramid’s slope in regular intervals, and the pilgrims would spread out from the central stair onto the platform corresponding to the level of their vocation.

Our platform was rather high up.

As I went up each day with my mother, we passed the other layers, and I got to glance at the variety of folklore on display.

On the bottom layer, people guarded the pyramid. They were constantly building defences with sandbags, and trained themselves in armed combat. They walked around in gangs, huddled around campfires in the dark, and I’ve heard that their oaths of loyalty were some scary rituals. Every now and then, they installed checkpoints at the bottom of the stairs, generally being hostile and suspicious towards everyone they didn’t know.

We were always relieved once we were past that level. In comparison, the next level was much more orderly. Here, people were preoccupied with writing. They had procedures for everything: how to keep the floor clean, how to dress properly, how to write a procedure. In general, they were a nice and peaceful bunch, as long as you kept to the stairs, and didn’t expect anything out of the ordinary.

The third layer were the tradesmen. That’s where the whole pyramid got their groceries – and I’ve heard rumors that even larger, and more dangerous goods were on offer if you knew how to show your interest. The problem with that layer was that they constantly tried to rip you off. But my mom showed me how to control that threat. The trick was to get two of them interested in a deal at the same time. They were so busy trying to beat each other’s offer, that you just had to wait until their dispute was over, and the remaining price was the best you could get on the whole floor! 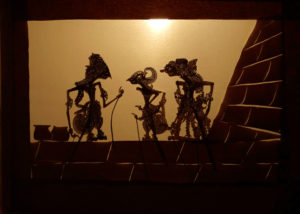 Usually laden with fruit and vegetables for the day, we arrived at our own layer. I was happy to be part of that level. Unlike any of the other folks, we truly cared for each other. We shared the food and even clothes sometimes. We helped each other develop mastery in our biggest talent.

I was still too young to know what my biggest talent was, but our preacher told me that maybe it was curiosity. So in order to check whether that was true, they put me together with Thomas, whose talent was to observe things and note what’s special about them.

For example, it was he who pointed out to me that on each layer the preachers talked about different things. The stories on the first layer made you afraid. On the second, they made you obedient. On the third, ambitious. On ours, they opened your mind.

Thomas also pointed out that each layer had its own bookshop. Books were a big thing on the pyramid. Everybody bought them, read them, and most importantly, talked about them to everybody else on their layer to let them know how much they had read. But it was Thomas who had found out long ago that not a single book appeared on more than one layer.

However, his biggest discovery took place one day when I was with him. It was when we were following up on the preachers, and trying to make out the differences between their messages. “Now this is curious!” he exclaimed, as always when he was about to show me one of his discoveries. “Did you notice”, he said, “that on each layer there is a number of people who do not really listen to their own preachers, but to the preachers from the level above?”

He was right. You could see it, if only you looked. And that was the moment of my greatest contribution. “It is obvious: higher up is always better. It is in the nature of the Pyramid. It just takes people time to find out. But eventually they all want to move one layer up.”

It took us some days to digest this insight: If there are layers, sooner or later there are social aspirations. Now thoughts are like cookies: when you chew a cookie for long enough, you inevitably end up longing for the next one. And so it came as no surprise that after a few days, the next conclusion dawned on us.

How come we’d never really been interested in the layer above our own?

That’s when we discovered Teal.

Teal, as we later found out, was the name of the top layer. Only the Teal people had names for the layers – the people on the rest of the pyramid had never thought of it. Teal stands for “The elevated additional layer”, because they had built that layer only recently. And somehow, we soon noticed, its inhabitants still carried with them a preoccupation for building. 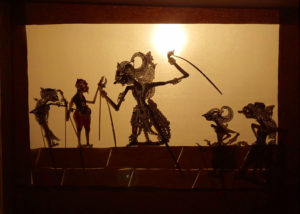 They were building all day, and they did so in ever changing small groups of people. Like in a dance, they moved around in circles, and each person would move from circle to circle, performing a series of tasks, and then move on. Only, because of the constant forming and dissolving of circles, it never became quite clear what it was they were building. But that didn’t seem to bother any of them.

They also changed hats all the time.

Having grown up on a layer of openness and harmony, we were instantly fascinated by the dance.

With our eyes still bright from excitement, we climbed down the stairs back to our own layer, in order to tell our friends and parents about our discovery.  And as if the day were not yet full enough of discoveries, just as we got off the stairs onto our layer, we saw an open door in the slope next to the stairs. 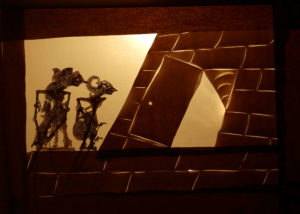 A pyramid is not supposed to have doors.

We were thunderstruck. For a moment, we could neither move nor speak. But it seemed like our old preacher was right: curiosity got the better of me, and I urged Thomas to follow me into the pyramid.

Slowly, we climbed down the narrow steps. On and on they went, an endless descent into darkness. Soon enough, the light from the open door behind us faded to a tiny point. And as with every step our eyes grew more accustomed to the darkness, we didn’t realise at first that the dim light we were able to perceive no longer came from behind us, but from ahead.

Once at the bottom, the stairs gave way to a small antechamber, and around a corner, another room dimly lit by a couple of torches. We peered inside. It was a large room with two rows of thick columns. On either side of it, there were piles and piles of books, wrapped in paper and bound with string. On the wrappings we recognised the names of the various bookshops of the layers.

At the very back of the room, below the torches, was a huge desk piled high with paper and what appeared to be various scientific instruments. We were just approaching the desk, when the thud of the door behind us made us stop in our tracks. 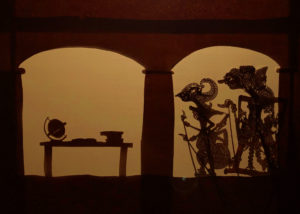 “Now look who is here!” We kept very still, heads ducked between our shoulders. “Welcome my friends, welcome. By now you will have learned your first important lesson: that in every pyramid since the beginning of time, people aspire to get to the top, but the real masters are at the core of its construction.”

Now where did I know that voice from?

Thanks to Tom for showing me what you can do with a pyramid.